It is a straight forward method and it doesn’t seem to encounter much efforts theoretically. Although, when you have the management report crashes all of a sudden while doing the export or import, things get too complicated.

As clearly illustrated in the screen shot below, on the import export wizard of the building blocks, you highlight the specific reports you want to import and click on “Import Function”. At certain import it works and at other chances it fails and MR crashes and close. 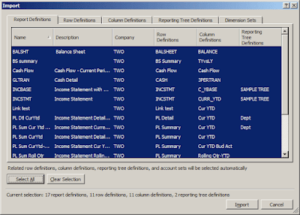 MR Crash Cause The root cause of the problem above is that if the “mouse cursor” passes over the “report name” column, management reporter client pops up an info message, this functionality is not supported by a certain window update.
Resolution In order to ensure that the MR client will not crash while doing the import export for the building blocks, you simply need not to move the mouse cursor over the “report name” column. Eventually, the building blocks will be imported and exported smoothly without any encountered issues.